Since the creation of first armor, the need for the underarmor clothing has appeared. Depending on the time period, region, type of armor, warriors, and armorers came up with different solutions.

It is now known exactly when the first underarmor clothing appeared, there’s a good possibility that the first armor was worn over the everyday clothes, or even that the armor itself was softly padded.

On the ancient Greek images, we can clearly see that the armor is worn over a naked body or a thin sleeveless shirt

The reason for such nakedness could have been a desire to look attractive, of course, well, you know, those greeks… But we also will take into account the hot climate, and the desire to make the protective gear as light as possible. A fabric padding was used so that the edge of the armor wouldn’t rub against the skin.

In his famous notes, Julius Caesar mentioned fighting clothes with protection against arrows, made out of felt, fabric, or leather. His legionaries made it in 48 BC during the Battle of Dyrrhachium. The dictator forgot to mention whether it was underarmor or was worn over the armor. 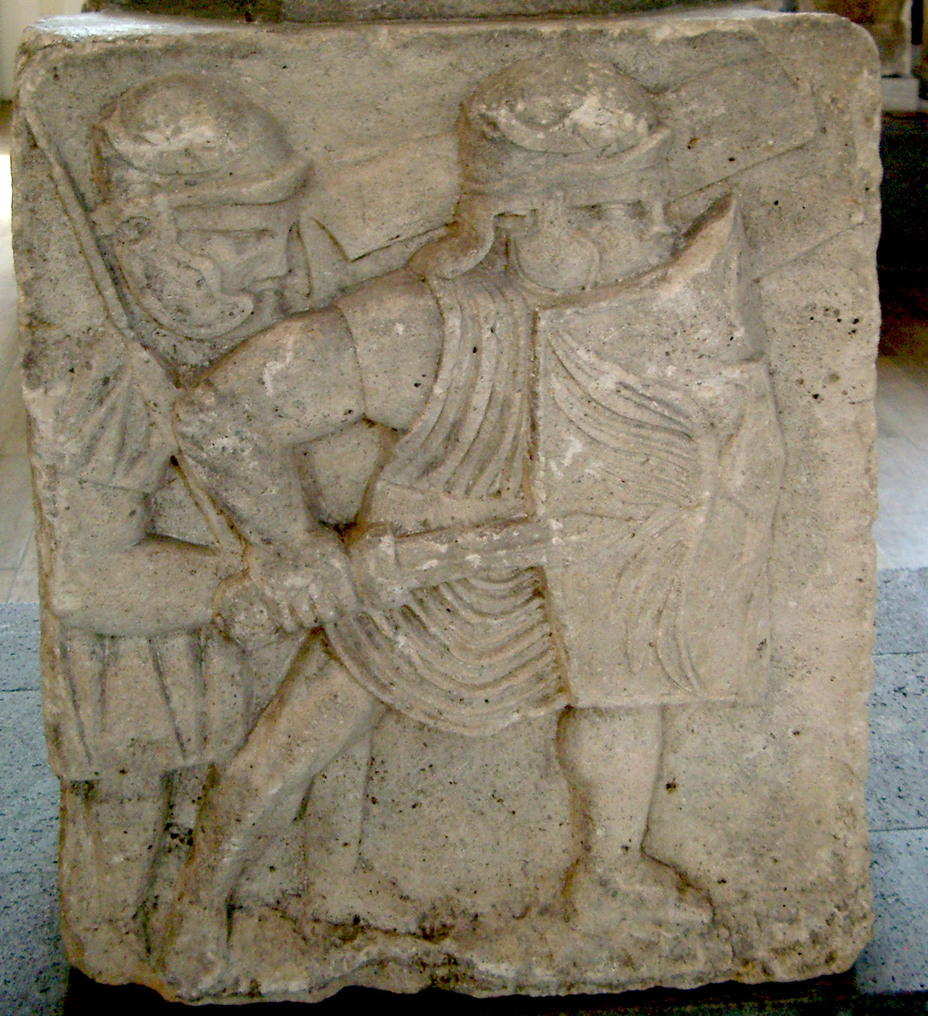 On the relief of the Mainz column, the clothes worn over the lorica of the legionaries are visible

In the 5th century AD the anonymous roman author of the work “On the Things of Wars”, mentions a certain thoracomachus, I’m not certain how it is pronounced, this was a first official underarmor name, and here is how it is described:

“This is a kind of clothing made of felt, for the size of the human chest and its coverage. It was sewn by a skillful seamstress out of soft wool, at the fear that wearing the lorica first would damage the body by weight. The one who wears it will have a great relief for the parts of his body, which will help when working with a weapon, and during the bad weather”.

This is an image from the “De rebus bellicis”, thoracomachus looks like a loose-fitting shirt

The unknown author of the “Life of the Feodor of Sicyon” in the 7th century AD has also written about the heavy armor of 50 pounds (around 20 kg) emphasizing its heaviness and that is was uncomfortable to use comparing to everyday clothes, and hinting that the underarmor was needed.

The Byzantine Emperor Maurice, 7th century AD, who most likely wrote the famous book about the military of the early Middle Ages “Strategikon”, mentions a specific Himation, made by Avar example out of linen, goat wool or another wool fabric, the length was to the knees of a rider.

Avars were Eastern nomads who came to Europe after the Migration Period. Did they bring the new kind of underarmor with them? The question is left unanswered. According to modern reconstruction, the Avar riders look similar to the Byzantian ones.

In the Middle Ages in Western Europe, several different notions for underarmor clothing are used. The ones most often used are aketon, padded jack, arming doublet, gambeson, and pourpoint. It is worth to mention that there was no certain definition of each piece, different words could have been synonyms. For example, aketon and gambeson.

The fighting clothes have different terms than the everyday ones. But since there was no military uniform regulated by the charter, it is difficult to understand from medieval descriptions what exactly the warrior had under his armor. Could they have worn protective equipment over everyday clothes? In rare cases, yes. Although, this applies either to the least wealthy warriors, or the case when part of the equipment was worn in a hurry, with a sudden attack.

So, the famous conquistador Francisco Pizarro tried to hastily pack into a cuirass, caught by the killers at a banquet. Of course, he was not in a combat suit at the table. By the way, he still did not have time to dress up, he fought off the killers with a cloak wrapped in his left hand and a sword in his right. He died the death of the brave, fighting alone against several dozen attackers, and grandfather Francisco was well over 60 then. 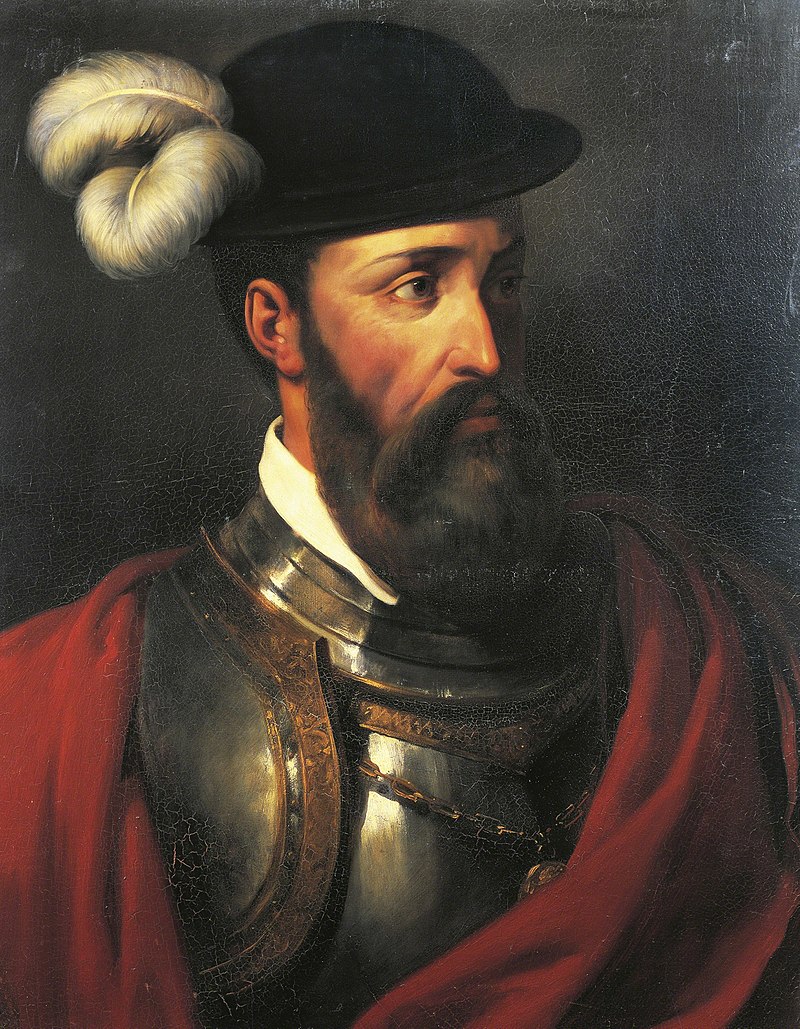 Portrait of an “old tiger” in armor (posthumous)

Also, clothing related to the underarmor one was often worn over the armor. It served as a factor in the recognition of “friend or foe” and as additional protection.

Unfortunately, even the late medieval underarmor has not reached our time. A perfect example is a military doublet from the Philadelphia Museum, dating from the mid-16th century. Its weight together with chainmail sleeves is 4 kg.

The material for the underarmor was primarily linen, as well as wool, felt, leather, har, horsehair. The underarmor could be quilted in a variety of ways.

How thick was the underarmor? Medieval images show a small thickness. So in the frank miniature of the 9th century, it is clear that the armor is worn on a thin lining. It is clearly visible how the chainmail armor fits the warriors tightly. This is especially noticeable in comparison with the “external”, over-armor protection.

But what about the knights of the East? In different regions of Asia, the problem of underarmor was solved in different ways. The already mentioned Avar riders definitely used a special underarmor clothing.

There are known images of the Mongols in lamellar armor combined with a gambeson.

For example, for a poor Mongol, a thick robe could have been both an underarmor clothing and armor itself

As for Rus, then the field for research remains huge. It should be remembered that from the end of the 11th century on the battlefields of Rus the horseman of the knight type with similar underarmor and armor elements also dominates.

If you are interested you can find out more in this video: